The Museum of Weapons Montichiari Agostino Bianchi was born from an association founded by Mario Baratti which collects many items collected by monteclarensi, starting from 1796, through the various wars of independence, until the Second World War. In dedicated to the weapons department found a statue of Italy, memories of sailors and soldiers of the First World War, Garibaldi’s portraits and Portesi, first soldier to die in Montichiari during the resistance, various documents, medals, helmets, bulletins war, rifles, Austrian muskets, pistols, bullets and more. 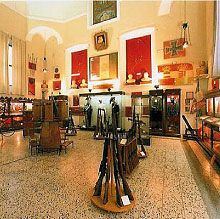 Our hotels in Sirmione are approximately twenty minutes from Montichiari, see if there is availability