The park is divided into a safari zoo that allows you to get around in cars among large African animals; a wildlife park, with a walking path between birds, reptiles and large mammals; a dinosaur park, with full-scale reproductions of some dinosaurs. Open from March to November and weekends in December; about twenty chilometers from our hotel in Sirmione.

The Natura Viva Park of Bussolengo, over time has evolved from wildlife park in a modern zoological park, in order to protect species at risk of extinction. The property is family Avesani since 1933 , while the Idea of ​​transforming part of it in the wildlife area was created in the sixties to the architect Alberto Avesani that will make the first opening in 1969 with what is now the path fauna . The park was expanded in 1973 with the Auto Safari, in 1978 with the Aquaterrarium, the Tropical Greenhouse and Dinosaurs area; in 1985 began a period of general redevelopment, including the role of the zoological park, by exposure of animals to protect them. Natura Viva Park is near to Pastrengo at about twenty chilometers from our hotel in Sirmione

In this area has been played a habitat of the tropical rainforest, where the trail leads to Interior of a dense vegetation inhabited by colorful birds, crossed this will take you to the field of alligators that can be observed in their aquatic habitat .

Area related to Tropical Greenhouse where there are reptiles, and fish, were placed here also some constrictor snakes, lizards and some varieties of tropical fish of coral reefs.

Sector in which there are represented in life-size and in detail some specimens of dinosaurs, about twelve specimens including the Iguanodon, the Triceratops, the Stregosaurus. The project is constantly updated with new discoveries.

This sector is to visit by car , to reproduce the feel of an African car safari, passing a few meters from African animals like giraffes, zebras, antelopes, greater distance from rhinos, hippos or groups of lions or cheetahs, from some years you can see also the hyenas. Access is permitted only with locked cars, for safety reasons it is not permitted to enter the car with soft top and bring dogs. 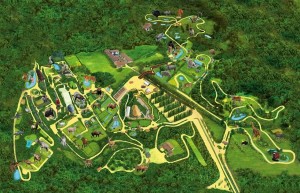