Bike Tour Sovenigo Lakes, Path in Valtenesi from the coast inland , riding in the production areas of the Garda Classico , among vineyards and castles , lakes Sovenigo are a major pile-dwelling site of the Bronze Age.

San Felice del Benaco with the centers of Portese and Cisano
gives countless testimonies of fairy-tale charm and beauty . Palace ” former pawnshop ” ( 1593 ) built thanks to the will of the rich wealthy James Pace who left all his properties providing that poors could use for the grant; Rotingo Palace (XVIII c.) The Sanctuary of Madonna del Carmine (XV c.), Cominelli Palace (XVII cent.) and last but not least , the Island of Garda with the beautiful palace of the early ‘900 , of which enjoys a splendid view from the promontory near the church of San Fermo. 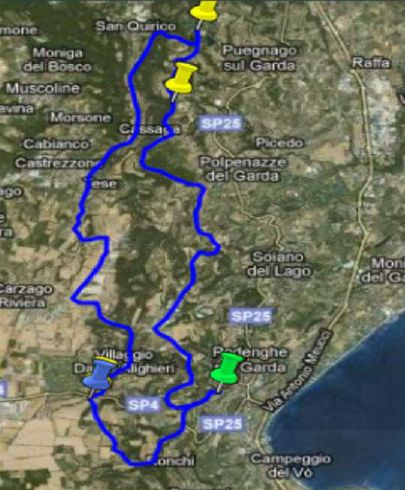