It is located in the famous and homonymous hamlet of Desenzano del Garda, in direction of Pozzolengo, to the Morainic Hills of lake Garda. The tower of San Martino is 74 meters high, was built between 1880 and 1893 in memory of the battle of June 24, 1859, on the top of the tower it was placed a rotating tricolor light (green, white, red), while to reach the top of the tower was created a ramp instead of steps, to be able to go up with horses and the walls of the whole tower were completely frescoed with images to remember those tragic moments of war. From its summit you can enjoy a wonderful view, weather permitting, that sweeps across the lower Garda and up to Valeggio. The Historical Museum of the Tower of San Martino, 1838, is located next to the tower of San Martino and are preserved objects of that bloody battle, always a short distance from the tower is the Ossuary of the Tower of San Martino that preserves remains of 2619 Italian and Austrian soldiers. 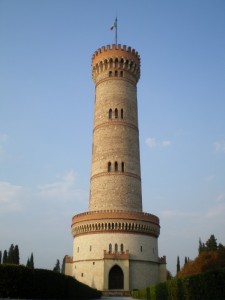 Every year on june 24th is set up a solemn commemoration of the battle of San Martino and Solferino with people in period dress.