The Sigurtà Garden Park is a historic property in the heart of Valeggio, it is the garden of Villa Maffei with an extension of sixty acres, opened to the public in 1978, over time, become one of the most beautiful gardens in the world , its origins date back to the fifteenth century. The season of the park is marked by five large blooms , the most famous are those of the avenue of roses and tulips ; particularly suitable for families.

The Sigurtà Park is located in the heart of Valeggio and it takes water for its irrigation thanks to an ancient document , surrounded by a high wall history , so that the entire property has its origin in 1417 and has remained undivided in time thanks to this wall, the property has always been considered as the “brolo”, Celtic term that defined self-sufficient area in which he lived a noble family with all the servants, complete with main house, smaller buildings, chapel, stables, dovecote , stables , warehouses and farmlands, orchards, vegetable gardens , woods for hunting and for the supply of wood , all surrounded by a high wall of defense. in the “brolo” was also provided a space left in the garden for pure enjoyment of the owners and of their hosts, in this case, seems to coincide with the original size you think of the fifteenth century, but definitely recorded from 1616. the property, over the centuries, passed from hand to some important families, such as Guarienti, the Maffei, the Nuvoloni and after a decline in the early decades of the 900, has come to Sigurtà in 1941 , which gradually bring the garden to the magnificence of the past worth remembering that among the guests there were also important emperor Franz Joseph I of Austria and Napoleon III.

In Parco Sigurtà the season is punctuated by five large blooms that begin at the end of March with more than one hundred and fifty varieties of tulips, hyacinths, grape hyacinths
Tulipani-Sigurta
and daffodils, with colors ranging from yellow to red and white cyclamen, followed in late April the iris, which color the long “Avenue of Fontanelle” of yellow, orange and purple, in May, along the “Avenue of roses” the roses bloom which are one of the major attractions of Sigurtà Park in the
Iris Sigurta
summer months blooming water lilies and lotus, the first on the waters of many lakes in the park, with colors ranging from pink to red, white and yellow, the latter with large white and pink petals always near water; past summer, in September, it’s time of asters, from hints of blue and purple with yellow center, flower which forms the Virgil, telling about the ornaments of the altar of his time.
In addition to the five large blooms that mark the passing of the months from March to the end of September, are the completion of the scenario Sigurtà Garden blooms than fifty varieties of annual plants that end with the various shades of pink, red and white begonias and those sage .

MAP OF THE PARK GARDEN SIGURTA’ 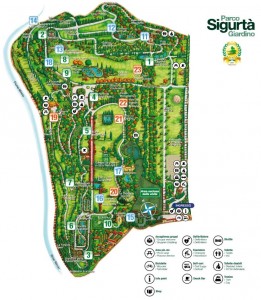