The Palio of the walls of Peschiera del Garda is a race that is held every year in August and lasts two days, is part of the traditions of Lake Garda when he was tied to the Venetian Republic who introduced the Venetian rowing on the lake. The race takes place around the walls of the fortress of Peschiera and attended about twenty boats with four rowers. 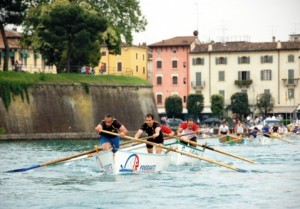 Look if there are offers Hotel in Sirmione for this period